A landslide victory in the local elections on 5 May saw the Liberal Democrats resume in overall control of St Albans district council for a second term.

Lib Dems won 50 of the full 56 seats being contested this time after a review by the boundary commission redrew the political map of the district. Normally only one seat per ward is up for grabs each year.

The wins were kicked off by Chris Brazier, who was re-elected for one-seat Colney Heath ward with a majority of 247, followed by victories for Michael Mortimer Jones and Simon Mostyn in two-seat Marshalswick West.

Redbourn, which also had two seats available, was taken by our candidate Lucinda Carney alongside independent David Mitchell. 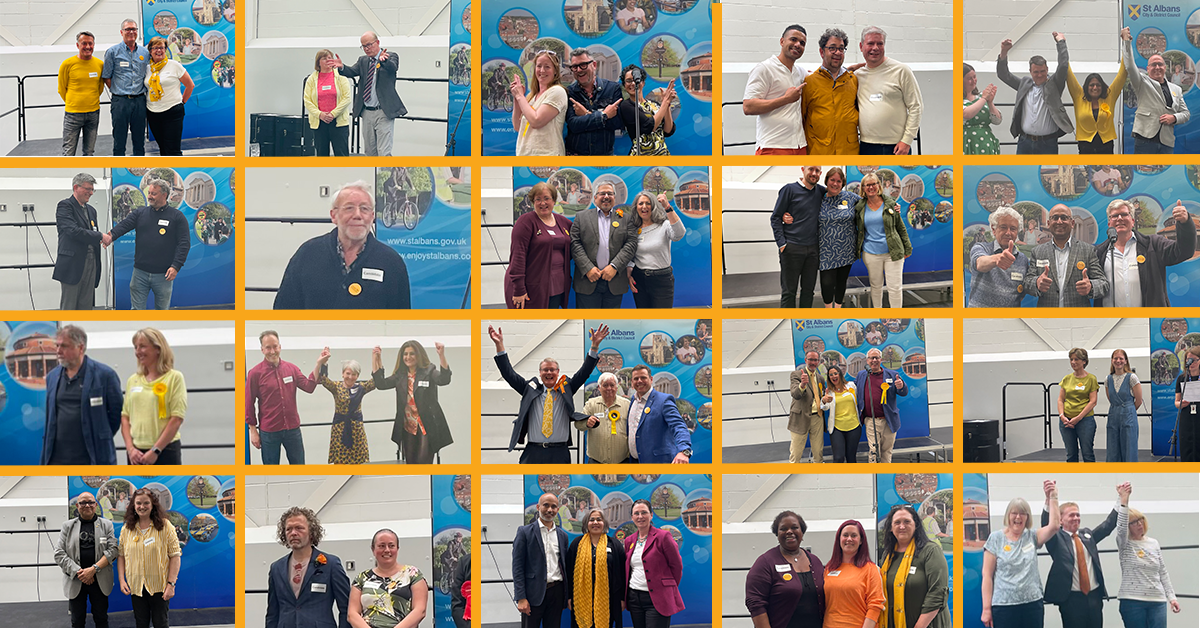 In the upset of the day, Tory group leader Mary Maynard lost her seat when Lib Dems Dason Canning, Paul De Kort and Pip Liver sailed to victory in Harpenden East with 1,293, 1,434 and 1,435 votes, well ahead of Maynard’s 859.

In St Peter’s ward, Lib Dems Danny Clare and Jacqui Taylor and the Green Party’s Simon Grover took the seats, while the new ward of Harpenden North and Rural saw Ed Moore, Ayesha Rohale and Allison Wren all walk away with a sizeable win.

Verulam Lib Dems easily saw off the competition, with Dawn Gamble, Edgar Hill and Andrew Warwick-Thompson gaining 1,977, 1,941 and 1,705 votes respectively, with the nearest Tory notching up just 835. Robert Donald, Roly Everall and Geoff Harrison also cleaned up in Cunningham, each with a majority of more than 1,000.

Lib Dems Muki Gorar, Emma Matanle and Sarwar Shamsher trounced the Tories in Sopwell ward, while in Marshalswick East and Jersey Farm, Raj Visram, Elissa Da Costa-Waldman and Lorraine Kirby made it three out of three in this newly drawn ward.

The new ward of Hill End was claimed for the party by Jamie Day, Azmat Mughal and Anthony Rowlands, while former Tory leader Julian Daly was ousted from his seat of Harpenden West in a battle with Lib Dems John Galvin, Fiona Gaskell and Gill Haynes.

In London Colney, Tony Lillico and Guy Gampell won two out of three, with Winston Davis sadly missing out this time.

Council leader Chris White was easily re-elected in Clarence, as were Mark Pedroz and Josie Madoc, who secured an impressive 2,045 votes.

The Tories won three of their only four seats in the district in Harpenden South, with our candidate Zoe Galvin missing out by just 26 votes.

After a lengthy recount, the final result to be announced was for Sandridge and Wheathampstead, where our candidates Lynn Cunningham, Kristian Gavan and Sharon Hollingsworth were duly elected.

Council leader and Clarence councillor Chris White said: “The results of the district council elections, as always with such elections, reflected a number of factors. There was clear support on the doorsteps for what we were doing at the council and a rejection of the alternatives.

“There were also astonishing levels of anger with the Conservatives at national level as well as huge support for Daisy Cooper, the MP for St Albans, even from many living outside her constituency.

“The Lib Dem group on the district council is now larger than it has ever been – and this immediately calls for humility. Many did not vote for us and we will not overlook them. There are also massive challenges ahead, not least the inflation levels which will place yet more pressure on local government finance.

“We will be looking to set up new ways of being accountable to the voters. We believe that politics in the district can now be more constructive and civilised with the departure of some of the key players and the rejection of Trump-style politics.

“It’s a sacred trust: we will live up to it and get on with tackling the climate emergency, the shortage of social housing and improving the services and facilities the council provides to the community.

Daisy Cooper MP said: “Many people will have been aware of local Lib Dems’ impressive track records of action within their community, and voted for their strong local community champions – although there’s no doubt many will have voted for the Lib Dems as a protest against Conservatives and their prime minister who has lied and misled Parliament.

“I’m so proud that so many in St Albans share our values and our forward-looking vision for our community.”