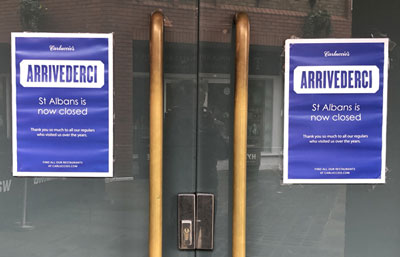 The referendum is for the Neighbourhood Plan in Harpenden, which is due to take place on the 7th of February.

Neighbourhood plans were introduced to give local communities an opportunity to set planning policies, and can only be adopted following a referendum. They form part of the planning policies for planning authorities, who have to consider them. You can see what it proposes on www.harpenden.gov.uk or you can pick up a copy in the Town Hall and Library.

The Neighbourhood Plan is a 15 year planning document (to 2033) that has been written and shaped by the people of Harpenden over the last two years, taking into account over 3,600 survey answers. Any planning application for Harpenden put forward in the future would have to be in line with its policies if it was voted in.

It is a real reflection of the town’s opinions and has been put together by many volunteers and community representatives from a wide range of groups across the town. Many of your fellow residents have given up hours and hours of their time to do this for you. It is your plan.

You might feel that some of the policies really appeal to you – for example, it is big on sustainable transport like walking, cycling and other environmentally friendly methods. It protects some of our green spaces. It focuses on the need for 2-3 bedroom houses.

If the town votes 'No' then we will have no document of any sort representing the opinions, wants and needs of Harpenden when planning applications come forward. Only policies from the National Planning Policy Framework and the St Albans Local Plan will be considered.

District crying out for homes people can afford

The Government is insisting on a much higher level of house building in the district than had previously been planned for and is  even threatening to take over the council’s planning function if its doesn't come up with the goods.

This means that there will be home limited loss of green belt, some of which can be mitigated by allowing new homes to be built on the controversial Radlett Aerodrome site, currently set to be an environmentally disastrous rail freight terminal.

Local Lib Dems are saying that new greenfield developments can be made to work provided the Government and developers come up with the money for schools, new highways, public transport, community and NHS facilities first – not after the houses start going up, when it will be much too late.

The council must also play its role and be prepared to become a developer in its own right: this is the only way to provide the volume of social housing needed to make it possible for younger people to stay in the area. The Conservatives have failed to take decisive action but a Lib Dem council would deliver on this.

Brexit deadlock: THIS is the conversation I think we should be having. What do YOU think?

Daisy Cooper believes we should have a People's Vote. She says, "Theresa May has wasted months and months delaying this vote, and has now suffered the biggest defeat in Parliament ever.

It’s almost criminal how other important issues - like reforming business rates, and NHS and schools funding - have been left to fester and families left in limbo.

The Conservative Government has failed to find a solution and Parliament is now in gridlock. Liberal Democrats demand better.  We need to put the available options to a People’s Vote, including the option to remain in the EU."

Watch Daisy Cooper speak in this video about what the conversation we should be having.

A personal tribute to Paddy Ashdown, Rest in Peace

“Extraordinary times demand extraordinary people, Daisy.” That’s what Paddy said to me earlier this year. He had frog-marched me from Holborn to Westminster and demanded to know what I thought about the state of politics, and what more we could all be doing about it. “We have to save our country, Daisy.”

Just two weeks ago I did some shadow-writing for him through More United. I used his line about needing extraordinary people. As I wrote it, I found myself smiling ear to ear. I joked with my partner how empowering it felt to channel my “inner Paddy” to write it. And then sheepishly said, “it doesn’t read too much like a swan song does it? I don’t want Paddy to think, y’know, that...” Paddy was too unwell to look at it.

I first met Paddy when we sat on a panel together as speakers at the Autumn 2010 Lib Dem Conference. We were only a few months into coalition government and it already felt very rocky. Even as a Card-carrying party member, Westminster politics felt very remote. I had started reading and writing about liberalism and ‘community politics’. And what it means to put people back at the centre of our politics. That’s what we were discussing that day. I can’t remember what Paddy said - but I remember feeling incredibly inspired. And moved to action. My friend Will sums up Paddy’s vision perfectly: “Paddy wanted people to be empowered - free from the chains of poverty, free from over-bearing states, and supported to achieve their full potential.”

More recently at More United (where I work & where Paddy was on the board), Paddy and I regularly discussed the state of the country and of our politics. I was honoured that he campaigned for me in St Albans in 2017 and that he spoke at a fundraising event for me personally as a Lib Dem candidate in July. “It’s the hottest day of the year - why the bloody hell is everyone wearing ties?”

Several times in the last two years he urged me to put together the “best liberal minds” from both within and outside the party. “We’ll host a dinner. I’ll tell Jane. No I won’t, I’ll find someone else to host the dinner. Oh I don’t know. Someone will. I’ll speak. If you think it would help? We must reignite our cause. We must get those minds together. In a room. We must. We must.” He was always fizzing - with ideas and words. I regret so much that this still sits on my to do list.

From first seeing his face on the front of my brother’s Lib Dem membership pack growing up, (“Who’s that?”, I asked. “Paddy Ashdown. He’s cool.” I think Oly said) to chatting politics over a cuppa (“Builders. Two. You take a builders don’t you?”), I always felt like I was in the presence of a great mind and a great leader.

In truth, I probably didn’t know him that well, but I did feel close to him. When we chatted, I felt we had a shared fire in our bellies, a burning sense of injustice about the state of the world, and an unquenchable appetite for making life better for ordinary folk.

He had leadership, charisma, vision and drive. We’ve lost a true political leader. He was one of those extraordinary people. And I’ll miss him.

Merry Christmas from Daisy and the local Lib Dem team

Watch Daisy's Christmas message about what your local Lib Dem team have achieved this year in St Albans.

“The Conservatives decision to hold a vote of no confidence in the Prime Minister is yet another hopelessly reckless move by this out-of-touch and out-of-control government. There are just 107 days left until we could crash out of the EU and the public rightly are crying out for a Government that puts the national interest first. But this Conservative Government has been found in contempt of parliament, has stopped MPs debating and voting on it’s disastrous deal, and is now consumed by in-fighting. The Liberal Democrats demand better and the people of St Albans deserve better.”