Your questions answered about the plans for St Albans' charter market

Mandy McNeil, the prime mover and shaker behind the initiative, gives us a personal, insider view of the district council’s moves to bring the buzz back to the retail heart of the city.

Mandy, a Lib Dem councillor and portfolio holder for business, tourism and culture, answers the key questions behind the market’s first facelift in decades – and the innovative steps being taken to restore the market to profitability after years left languishing in the red.

Q: Why are you making changes to the charter market?

Mandy: This was an essential move to stem the £600,000+ in combined losses accumulated by the charter and farmers markets under the Tories, caused by a steep decline in revenues and rising fixed costs. 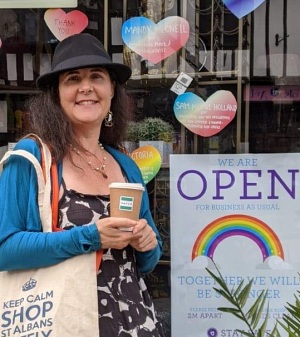 That’s over and above the hundreds of thousands lost on Christmas markets, which had a separate budget, and which we stopped in 2019, a move that traders and businesses were calling for as the Christmas markets were competing with them rather than increasing footfall.

Our current plans are to give St Albans’ historic charter market an exciting new look, as part of a broader strategy to increase footfall, incubate young start-up entrepreneurs and new traders, and bring the market back to breakeven.

Mandy: The main proposal is to keep with a gazebo market. Pending the outcome of a current consultation, they could be trader-branded gazebos to showcase their personality and brand, or decked in the colours of St Albans – with an updated twist – as part of the permanent replacement of the old-style market stalls.

Modernising the market with attractive gazebos will enhance the vibrant atmosphere of St Peter’s Street on market days, and so help the city centre’s long-term recovery post-pandemic.

Q: Why are you making these changes now?

Mandy:  To save the market!

Moving to a permanent gazebo market, with fixed pitches, could save up to £500,000 a year, on top of the savings we’ve implemented by exiting the failed Christmas markets. This will be done through a combination of reduced fixed costs – most of which was tied to the stalls – and no longer having to fund a deficit, which has been exacerbated by the pandemic.

Covid has led to a reduced market offering with minimal revenues and high fixed expenses, while the Tory Government is only reimbursing us for two-thirds of lost revenue for 2020-21.

The reimbursement stops after the first quarter of 2021-22, so from June, when we’ll still need to be prudent and run a reduced market, we must have a low fixed-cost structure ready and in place.

Since the pandemic, traders have brought their own differently-coloured gazebos to the twice-weekly market for safety reasons. It makes the market more Covid-secure because it reduces the number of people who need to handle the fixtures – and they can be put up and down without the use of diesel-powered mini-tractors, which is an eco-friendlier option.

Q: Are market traders happy with the proposals?

Mandy: We’re in consultation with a range of stakeholders, including our traders, about these ambitious plans. Most importantly, we want to get the traders on board as they are what the market is all about.

Many of our traders are not from St Albans and they trade at other markets, with gazebos, so they’re experienced with how they operate. Gazebos offer more selling space and you can trade out of three sides during warmer weather, so offering increased sales opportunities for traders as well as helping with social distancing.

There is obviously concern about inclement weather, but the gazebos we’re considering are built to withstand winds of 40mph+, with the appropriate weights, and we’re working with Herts County Council, the landowner, to introduce tie-downs.

Also, once social distancing permits, the market will revert back to adjacent pitches, which will help reduce the impact of high winds by closing up the gaps, and also bring back the buzz of trader conversations and interaction that make market days so special.

Inclement weather is also an issue raised by residents, and as part of the regeneration plans for the Civic Centre and Alban Arena area we are looking at how we can incorporate space for a covered market.

Q: How did the market end up losing so much money?

But it was after the Tories unveiled their five-year plan for the market in 2015 that the deficit began to snowball out of control.

My predecessors are on social media querying these numbers and claiming that there were no financials on the market – that they only ever worked with budgets.

That’s perplexing: budgets are not actuals, they’re planning tools, and they were putting in projected revenues in excess of £600,000 as budget estimates, instead of normal business practice, which is to take your prior year actuals and apply an achievable inflation factor.

It appears that they’d never asked for actuals to monitor performance during the year. I did – and requested historic data to identify the trends and red flags. No wonder it came as a shock to my Tory predecessors to discover the market has made losses for years – they were completely oblivious!

Q: How will you make the market profitable again?

Mandy: We’re working closely with the St Albans Visitor Partnership (an advisory committee focused on a destination management) and the BID (the Business Improvement District), to launch an enhanced marketing and promotions strategy to deliver increased footfall for our traders and city centre businesses – after all, in large part that’s why there’s a market offering at all! And, of course, we’ll be making it cheaper to run.

We’re also implementing other initiatives. When I discovered the losses, I called for an audit, only to discover that there had been two previously, one in 2016 and the other early in 2019, and both were raising the same concerns I had. As a result, last year we moved from a predominantly cash-based pay-as-you-go collection system for pitch fees to near-cashless.

Also, we’re currently in consultation with traders on new terms and conditions and, from April, hope to implement pay-in-advance pitch fees, which is consistent with the majority of other markets around the country. This will discourage empty pitches when it rains.

We plan on offering fixed-pitch contracts with traders (something they’ve been calling on for years), and we hope to remove most of the £112,000-a-year business rate expense from the bottom line, although this can’t be implemented until we’re through this pandemic.

The 2017 rateable value of £235,000 per annum for our market is higher than some London markets and I’ve asked council officers to initiate a business rate appeal, not only of the market rates, but also on our other commercial rate-paying assets, which, pending other considerations, might result in recovery of a portion of the business rates paid since 2017.

We’re also going to fix the budget process so that revenue forecasts for the market reflect the reality of the business.

Mandy: The council has unknowingly subsidised our markets by up to £200,000 a year for several years, on top of the hundreds of thousands in Christmas market losses.

The gap has only grown due to Covid-19 and a further 30% loss of revenues in 2020-21 which the Tory Government is only covering in part.

And, as I’ve said, from June 2021, we’re on our own, with no central government support, at a time when the district council must tackle a multi-million deficit due to Covid’s impact on our revenues from parking fees, business rates and leisure facilities.

Let’s be clear – a £1 in subsidy to the market is £1 taken away from essential services. So, continuing to subsidise the market is no longer a viable option, especially when we can deliver the same service in a vibrant way, for the benefit of residents and visitors, at breakeven, or possibly even with a surplus.

Q: Why are the Tories complaining about the changes?

Mandy: That the Conservative opposition has complained about these changes is ironic, given the catalyst for the restructuring stems from their previous poor management of market finances and operations.

Note that in October 2014 there were 162 permanent traders. Within five years the number I inherited was half that – just 80.

Remember, also, they were the ones who used ‘budgets’ that bore zero relationship to the actual performance to project a bogus breakeven/surplus position, and presented this to full council every year!

Their strategy was to ignore losses while also failing to implement their own five-year development plan, which included moving to pop-up, gazebo stalls.

And they paid out more than £40,000 to a consultant for this plan – then promptly ignored the recommendations and lost money!

Had they implemented it, our market would have been better-placed financially to face the pandemic and the new paradigm. And we might not have had to cut services elsewhere.

It was also the Tories who wrote to us twice during lockdown to ask us to close the market. They were also against us giving discretionary grant funding to our traders in lockdown one and again in December 2020, causing a delay in being able to implement the policy, which was not ideal given the pressing need to get financial support out to our traders and our businesses.

It’s dreadful the way they trash talk our market on social media and in public. How does that help fix the mess they left?

Many of our traders have invested in their own fabulously branded gazebos, and we have independent footfall data showing that our market continues to attract high footfall, even higher than pre-Covid.

I live a short walk from the market – I love it and I’m there twice a week on the ground, so can see and feel the vibrancy, and the amazing support coming from residents and visitors for these hard-working independent business owners.

Q: How optimistic are you these plans for the market will succeed?

Mandy: We are confident. That’s because our new market structure, being introduced by this Lib Dem-run council, combines prudent financial management with innovation.

We will future-proof our market through the use of gazebos and, in the medium-term, we’re looking to launch an online market-offering to boost sales further. Once the market is delivering returns again, the gazebo decision can always be revisited in future years.

But first and foremost, once city centre shopping returns to normal, our market will deliver increased footfall at a lower cost – for the benefit of our traders, businesses and residents alike.

We are currently working with Thameslink and the BID, who have advised that we are the only city with something going on. Thameslink’s PR team are already shouting about St Albans – all much-welcome support.

I’m also working with the National Market Traders Federation to bring the National Young Entrepreneurs Market to St Albans, while our new markets manager will be working to enhance the offering by adding more local traders and artisans.

And, on top, there’s a list of 100+ traders wanting to sign up, including local hospitality. Now, if that’s not a vote of confidence in our plan, I don’t know what is!