LibDem Treasury spokesman dropped by the University of Hertfordshire at the end of last week and gave a master class in political economy. 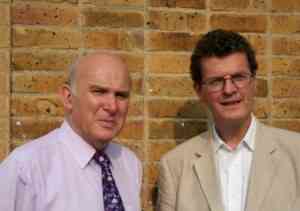 He was there at the invitation of Welwyn Hatfield Chamber of Commerce and Welwyn Hatfield LibDems, whose parliamentary candidate Paul Zukowskyj teaches at the university. In effect what we heard was a brief summary of Vince's acclaimed book "The Storm". There can be very few politicians who could give such an authoritative scan of the current economic horizon. Vince was perfectly modest about his own business background (chief economist of Shell International), and talked about the problems of being in the Westminster bubble. He was very keen to get feedback from local chamber members about their real experiences on the ground (predictably mixed!). I asked him about "quantitative easing" - or printing money as he bluntly described it - and what this might mean for future inflation, particularly if governments are tempted as in previous times of debt to inflate their way out of the problem.

My concern is for those people on fixed pensions or pensions which are only indexed to RPI or 5 percent whichever is the lower - which is about as good as most private sector pensions get. Vince thought that an independent Bank of England would hold the line and that it would be inconceivable for a future Chancellor to decide to send an open letter to the Governor relaxing the inflation parameters - although he did admit this would create its own set of problems as the public debt burden could no longer be magicked away at the expense of senior citizens.

I confess I was only partially reassured. I still think the inflation trend will be inexorably upwards and that it is not at all inconceivable that it will break the 5 percent ceiling, particularly if oil prices soar. PS As guest speaker at that evening's Welwyn Hatfield LibDem dinner Vince talked up the prospects of a LibDem victory next time in St Albans, and also of the benefits of clustering in terms of building momentum. He highlighted south-west London in 1997 when he got elected for the first time in Twickenham alongside other LibDem gains in a swathe of neighbouring suburban seats such as Richmond and Kingston. Here he was highlighting St Albans and Watford and South West Herts and how our separate successes mutually reinforce one another. Vince forecast the economic earthquake before any other politician. His job at Shell was scenario modelling and forecasting the future. Now he is projecting a political earthquake in this corner of Hertfordshire and it feels pretty shrewd to me.