While Sir Vince was in St Albans, he and Daisy Cooper visited Glinwell plc – one of the largest fresh produce companies in the UK – and met with their representatives as well as those from other sectors, including livestock farming, all of whom will be severely affected by Brexit. 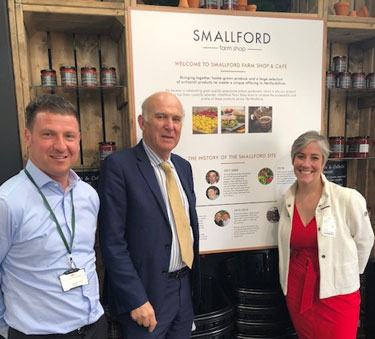 “Britain has some of the highest food standards in the world, but Brexit poses a major threat. Nobody wants chlorinated chicken, hormone-fed beef, or the associated animal welfare and public health concerns.

“There are many aspects of farming, from food production and supply to labour, which will be seriously affected if the UK leaves the EU and in so doing will sever ties with the regulatory bodies responsible for maintaining food standards.

“Quite frankly, the Conservative Government has no real plans to replace or replicate this regulation. Ministers have also refused to guarantee that the same high standards we currently enjoy will also apply to imported food. This could undercut farmers and drive them out of business.

“This situation is an absolute mess. It doesn’t need to be this way. Farmers deserve better, and Liberal Democrats demand better.”

“A shortage of workers and uncertainty surrounding Brexit is posing a serious challenge to British food production. The government needs to recognise that British horticulture is a successful, thriving sector that is capable of producing more great, healthy British fruit and vegetables for people to eat if it is supported by policymakers”.