There is an alternative railfreight site 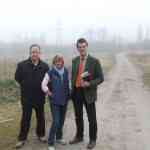 The key foundation of Helioslough's resubmitted application to build the giant freight terminal at Park Street is their allegation that there is no alternative site for a so-called strategic freight terminal in this quadrant of London. We have to prove them wrong. That is why local LibDem peer Tom McNally and I went with STRiFE campaigners Cathy Bolshaw and Chris Brown today jon a specially arranged visit to Sundon, north of Luton.

This is the site earmarked by giant logistics company ProLogis for a strategic railfreight terminal. The location, in an abandoned quarry and former landfill site, is adjacent to the Midland Main Line and the newly widened M1 motorway. Lord McNally arranged the visit because much has already been spoken of the merits of the Sundon site as an alternative but nothing beats seeing somewhere on the ground.

Although we had to peer through this morning’s fog as we walked over the site, we could see quite enough to demonstrate that Helioslough is wrong in claiming there are no other viable sites in this region apart from the Radlett aerodrome. Not only is Sundon close to Luton, where there is a crying need for new employment with the steady shrinkage of Vauxhall Motors and other major employers, but there is almost no immediately adjacent residential development. Contrast this with the massive impact Helioslough’s proposals would have on residents of Park Street, Napsbury Park and the whole south of St Albans, and it is clear that Sundon is a far more satisfactory option for a major freight terminal.

It is interesting to note that unlike Helioslough ProLogis already has a serious track record of and expertise in developing freight terminals in the UK and is the world’s largest operator of industrial distribution units. In the UK they have existing railfreight depots at Daventry and Corby and are now proceeding with Dartford, with further plans for Warrington and Alconbury as well as the Sundon site in Luton. In short they know a thing or two about railfreight. After the visit we drove back to St Albans at a steady 60 mph, the maximum pernitted for HGVs. It took a scant twenty minutes to reach the Park Street roundabout with a far better guarantee of journey-time after the recent M1 motorway improvements than there will ever be on the A414/A405. The Sundon site is clearly a viable and better alternative.

This further emphasises the importance of all the local political parties standing firm with St Albans District Council and STRiFE to continue to oppose any new Helioslough application.

And if it again has to come to a Secretary of State decision on the Park Street site, then whoever the minister will be at the time, he or she will be derelict in their duty if they do not visit the Sundon site.