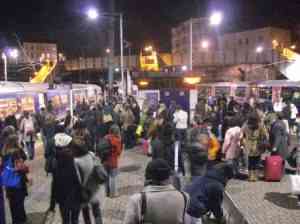 It is good news that it now looks like there may be a settlement of the "dispute" between FCC and its drivers.  This has been a nightmare for local commuters who have been caught between a rock and a hard place through no fault of their own. It was not an act of god.  It was a simple failure of First Capital Connect to deliver the service they had promised to the travellers who purchase tickets at such expense.  There should now be no ducking or diving by FCC about compensating passengers for a breakdown in the advertised train service caused by internal industrial relations failings.

It is certainly not good enough for FCC to lean on the ‘one-size-fits-all’ rail industry norm of paying compensation if journeys are delayed by 30 minutes or more.  30 minutes delay in a 20 minute journey from St Albans to London is entirely different in magnitude from the same delay in an intercity journey from Edinburgh or Cardiff. I have just come back from visiting my son in Berlin.  There the newly privatised operation of the suburban railways also more or less broke down due to engineering faults earlier this year, causing cancellations, short trains and huge delays.  Sounds familiar or what?  The Berlin company is now offering December travel for free annual season ticket holders giving them a month extra before they have to renew, an extra week for holders of monthly tickets, and other weekend discounts for all occasional travellers. It’s simple, it’s understandable, it’s fair.  This is the kind of customer care that FCC should now be showing to its passengers after a miserable few months.