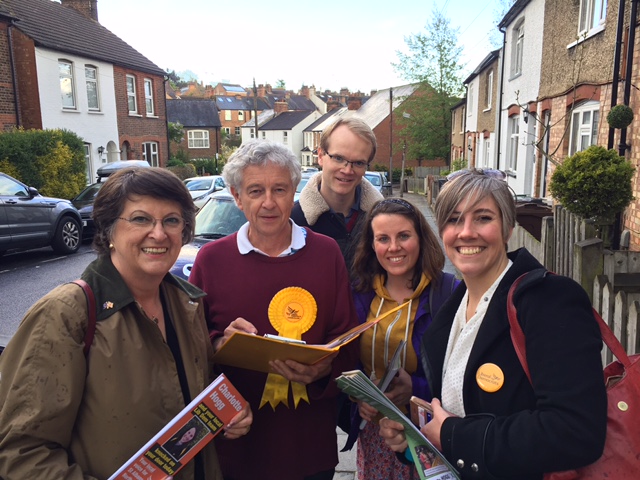 Catherine Bearder said: "The lies and blatant mistruths of the referendum campaign are crumbling before our eyes. They told us that food prices would not rise - they have. They told us businesses would not move abroad - they are. They said we were scaremongering - we were not. The residents of St Albans have an opportunity to send a message to the government on 8 June by voting to change the future direction of our country and to back Daisy Cooper to become their next MP. Only the Liberal Democrats can deliver an open, tolerant and united Britain."

Commenting on this week's news that the Conservative Government had lost its legal bid to delay publishing plans to tackle illegal air pollution until after the General Election, Catherine said:

"Th​e EU's ​agreement to cut deadly air pollution will save thousands of lives throughout Europe every year. The UK government must still commit to meeting these targets no matter what happens in the coming years. Brexit cannot be used as an excuse to water down environmental laws but the Government's attempts to ​hide the scale of the UK's air pollution problem and its plan to tackle it, are very worrying and suggest that the Conservatives are happy for us to become the dirty man of Europe once again.”

Daisy Cooper added: "This Conservative government is hell-bent on pursuing a hard, reckless BREXIT that will threaten jobs, businesses, livelihoods and future opportunities for the people of St Albans, whilst Corbyn's Labour have handed Theresa May a blank cheque to do as she pleases."

"Local people are already feeling the strain of an NHS pushed to breaking point, a national schools funding crisis, and the shambolic handling of business rate rises, train franchises and BREXIT food prices."

"This election provides an opportunity to change the future direction of our country by future-proofing our economy, investing in capital projects and delivering world class public services. But Britain cannot have a strong economy and NHS with a hard BREXIT.

"Theresa May's government cannot be trusted to sign off the terms of departure. Only the Liberal Democrats want to give the people a say on the final deal, and if they don't like it and want to change their minds, the people should be able to revoke Article 50 and choose to stay in the EU after all."