A series of ‘wilding’ trials are under way to transform parks and public green spaces across the district. The aim – to rescue and restore our priceless natural heritage damaged by decades of intensive management.

And the message to St Albans residents is – if you want to help fight climate change and boost biodiversity – get involved! Share with us your ideas and suggestions to spread wilding to more places across the district. 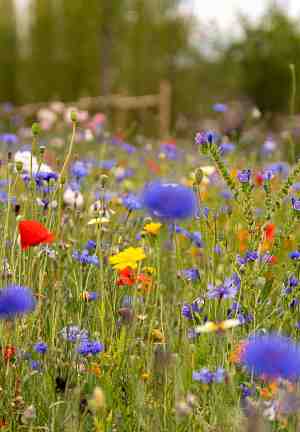 ‘Wilding’ involves letting the natural growth of native vegetation return in parks and public green spaces that otherwise would have been suppressed. In some places it’s a simple case of allowing this natural growth to improve biodiversity, while in others the trials involve the planting of wildflowers.

Upkeep of highway verges
The trials are being led by St Albans district council, who are working in partnership with Herts and Middlesex Wildlife Trust (HMWT), a local charity that manages a network of more than 40 nature reserves.

This year, 2020, is the first that Lib Dem-run St Albans council has taken over responsibility for the upkeep of highway verges, hedgerows, urban roadside trees and many grassed areas.

According to the Herts and Middlesex Wildlife Trust, more than 700 species of wildflower grow on the UK’s road verges – nearly 45% of the country’s total flora. They are home to a multitude of bees, butterflies, birds and bugs.

“Inadequate protection, changing farming practices and a lack of public awareness has caused 97% (7.5 million acres) to be lost in less than a century. In a world where the effects of climate change are becoming more and more prevalent, increasing the amount and quality of our species-rich grassland is vital,” it says.

Up to 23 ‘wilding’ trial sites are being established in wards across St Albans district – and residents are being asked to contact their local councillor with suggestions for other possible sites in their area.

What Lib Dem councillors are saying:

“Wilding is a really important step towards boosting biodiversity and the greener district we all want. Changing our maintenance schedules to let verges flower provides vital pollinators that encourage a whole variety of wildlife, including bees and other insects and birds. I'm really looking forward to seeing the emergence of wildflowers at carefully chosen spots in our green spaces and along some of our roads.”

“Verulam councillors are very supportive of this wilding project. In particular, we have revamped the Verulamium Park Consultative Forum to address key issues such as the River Ver and Park Lake revitalisation project, where introducing wildflowers and wetlands will be an integral part of bringing a refreshing natural landscape back to the park.

“Other areas in the ward will also benefit, as the biodiversity and natural habitat will bring residents and nature alike a peaceful and tranquil scenery to be enjoyed throughout the year.”

“The wilding proposals being introduced by the Lib Dems running St Albans council are great and it’s exciting to see so many sites already identified so soon after we passed the proposals.

“As a councillor for the city centre ward of St Peter’s, I’d like to have some sites in the centre and have already sent some suggestions to the council officers. I would encourage residents to send in their suggestions to their local councillors ASAP.”

“I’ve been working with my fellow district and county councillors in the past few months to support initiatives such as Wilderhood Watch and Grow Community Sopwell.

“I’m very excited for what this means for Sopwell ward. We have a passionate group of community champions who’ve been calling for the wilding since we came into administration a year ago. It’s fantastic that this initiative has been achieved within the first year of our administration and shows the power of community and public sector working together for a common goal – our environment.