St Albans' newly elected MP, Daisy Cooper, made the city's proud contribution to Britain's place in the world the centrepiece of her maiden speech in parliament.

Daisy said in the House of Commons:

“It is a great honour to make my maiden speech following many other accomplished and passionate speakers.

“My constituency, St Albans, is very proud of its contribution, both to Britain’s history and to Britain’s place in the world.

“Alban himself is the first recorded Christian martyr and Britain’s first saint. He was executed for giving shelter to a stranger fleeing persecution, and his grave is a site of pilgrimage to this day.

“Then there’s the Magna Carta: the “great charter of liberties” which has shaped democracies around the world. The very first meetings that led to the drafting of that charter were held in St Albans Abbey.

“Today, the Abbey is surrounded by pubs. St Albans has more pubs per square mile than any other place in Great Britain – and they are steeped in our nation’s history too:

“But these two pubs, and many more – in St Albans and around the country – are under threat like never before. They have suffered a crippling rise in business rates. 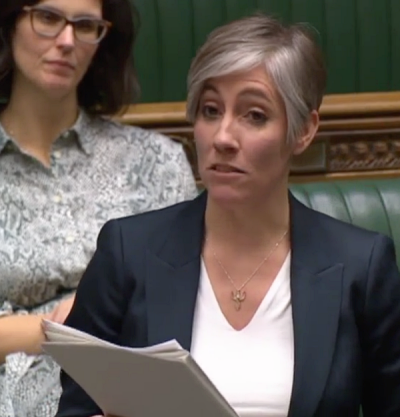 “The measures announced in this Queen’s Speech to help small retail businesses will not benefit those pubs whose business rates are calculated differently, and which have a higher rateable value.

“In St Albans and around the UK, there are pockets of pubs that have had rate increases of between 100% and 2,000%. They need urgent help if they are to survive the next few months, let alone centuries to come.

“It would be a cruel end indeed if these pubs – which have withstood the English civil wars – were finished off by a broken and unfair system of tax.

“To keep our pubs going, the Save the St Albans Pubs campaign has mapped out some pub-crawls. These crawls will take you through the 100-acre Verulamium Park with its roman walls and ruins, and to the Abbey – home to medieval art hidden for 500 years (until now). Visitors and locals alike will also walk through the Sopwell Ruins – and more alarmingly these days, alongside the often dried-up river-bed of the River Ver – one of the most precious chalk streams in the world.

“Indeed, my predecessor Anne Main warned in her maiden speech in 2005 that the River Ver was in danger of drying up. And yet here we are. And I would like to say that despite our many political differences, Anne contributed 14 years of public service to St Albans and to parliament, and I would like to pay a sincere tribute to her for that.

“But St Albans isn’t just a place of British history – it’s a place of international innovation.

“St Albans is in Hertfordshire, the county of opportunity. Around the city, we have a number of villages. Bricket Wood is home to the world’s leading building-science centre, the British Research Establishment, and dotted around in some other villages are many tech and research businesses. These cutting-edge British-based businesses are harnessing technology and knowledge to produce new products, new jobs and new solutions.

“Technology offers great potential to tackle many of our modern global challenges, but modern technology, science and research are international. British business requires the easy movement of people and skills across borders.

“This country has benefited from its EU membership and our research and development sector is just one example of that.

“My fellow residents in St Albans do not wish to lose the benefits of such close collaboration and alliances.

“And close international collaboration and alliance between Britain and our international cousins are essential if we are to tackle the biggest threat of all – the climate crisis.

“My fellow constituents in St Albans want tough action to avert climate disaster, including a complete moratorium on airport expansion, including at nearby Luton Airport.

“And we want to protect our local natural environment. In St Albans, a significant chunk of our green belt is at risk from the monstrosity of a rail and lorry freight terminal.

“Our chalk streams, including the River Ver in St Albans, are now in crisis. Both from over-extraction and the changing climate. Some 85% of the world’s chalk streams are located in England, and most of those are in Hertfordshire. They are known as England’s Amazon for a reason – these precious ecosystems are a unique global asset. Even without further harm, it will take decades for them to recover.

“As you can see, St Albans is blessed with a rich cultural history, cutting edge businesses and beautiful green belt. You can see why St Albans is often described as a wealthy, leafy, commuter town 20 miles north of London.

“But like most places across the UK, you only have to scratch below the surface to see that some people in St Albans are really, really struggling.

“There is a rising use of food banks and a growing presence of homelessness. There is palpable frustration at how public services – especially our NHS and schools – are chronically underfunded, and alarm at the rapid increase in crime from county lines.

“And the St Albans to London commute should be easy but it is often an unreliable, uncomfortable and increasingly unaffordable ride.

“To conclude, St Albans has a lot of history to draw upon. But our outlook is to the future.

“Over the centuries our magnificent history continues to inspire. From martyrdom to Magna Carta, and the uprising of the Iceni’s Boudicca, St Albans has a timeless tradition of being at the heart of our country’s fights for greater democracy, liberties and freedoms.

“We believe that Britain should be open and internationalist. We believe we should work with our closest international neighbours to tackle the global climate crisis. We believe in our responsibility to take in those fleeing persecution and war – as Alban himself did and as St Albans has continued to do from both 1940s London and 21st century Syria.

“I am honoured to represent my fellow residents of St Albans here in parliament. And I fully intend to honour our traditions and values during the months and years ahead.”