CYO to play with Blur? 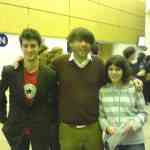 Alex James is a member of Blur. And that's my excuse for the quality of this picture taken with my mobile at the pre-Christmas County Youth Orchestra concert. He's blurred - geddit!

Alex had played with the CYO as a practice orchestra in the early heats of the BBC Maestro series about conducting until he was voted off. He enjoyed working with them very much and the affection was mutual. Indeed he formed such a high opinion of their musical abilities that he is thinking of using them in a recording next year. Great excitement for the orchestra, and for my son who plays the viola. That's why he popped into the Weston Auditorium to hear the December concert - all Russian and suitably wintry with a programme of Tchaikovsky, Stravinsky and Katchachurian.

And number two son and daughter were very excited to meet him during the interval as pictured. Not everything that Herts County Council touches turns to base metal. The County Music Services are truly excellent. The CYO concerts are of unfailingly high standard under the baton of conductor Peter Stark. When they played in the Rudolfinum in Prague last year they were described in one local paper as the finest youth orchestra to have visited the city - a touch hubristic perhaps but they certainly did not let themselves down. All my children have participated in youth music activities, all have unfailingly benefited.