Liberal Democrats at Herts County Council are delighted that at last a new root and branch review of how flooding issues are dealt with has been agreed.

They had been pressing for urgent action on the growing flooding issues.

In December, Liberal Democrat county councillor Sandy Walkington tabled a motion calling for action. This has now resulted in a detailed report to council panels which highlighted the growing problems.

As a result, the Conservative administration at County Hall has had to rethink how they deal with flooding and have agreed a root and branch review of the whole issue. 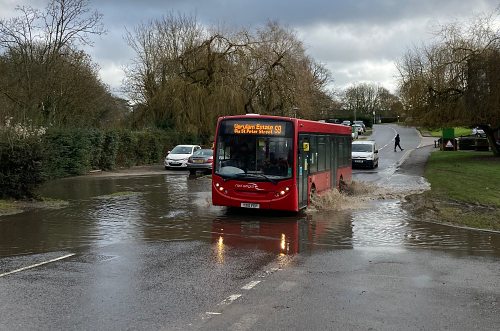 “I raised the issue because of the severity of flooding across the county last August,” said Sandy Walkington. “But it reflected years of exasperation from all my fellow councillors at perennial flooding problems which never seem to be solved and which cause so much distress to our residents.

“Often it’s a problem which goes beyond the county council and reflects failures by the water companies or the Environment Agency.

Global climate crisis
“We have to recognise that the global climate crisis is making this the new normal.  Floods are the canary in the coal mine for climate change as the warmer atmosphere generates more intense rain.  With so much carbon up there already, this trend can only worsen.”

Sandy said he was “open-mouthed” when the officer report drafted to respond to his motion stated that there were “no financial implications arising from this report”.

“It’s not as if we are even managing to address the current situation,” said Sandy.

“Thankfully following the debate at the panels, a recommendation was agreed about a flooding scrutiny to be undertaken later this year, hauling in the Environment Agency, Hertfordshire’s district and borough councils, the water utility companies, as well as the county’s own highways and flood prevention teams.

“This review must come up with strong recommendations and more importantly the budgets to back them,” Sandy said.