A number of “robust and effective” actions have been taken by St Albans City and District Council in response to the Covid-19 public health emergency.

“This has been an unprecedented challenge that’s placed huge demands on all our public services and the key workers that maintain them,” said Chris White, Liberal Democrat leader of the council.

Speaking at an online meeting of the council’s cabinet, Chris highlighted the work undertaken with partner organisations to help residents and businesses.

“As a council, we’ve taken a number of robust and effective measures to help combat the local impact of Covid-19. We’ve also worked closely with other local authorities, public agencies, charities and community groups as we are all in this together.”

The council is a ‘category one responder’, tasked by the Government to carry out a number of civil protection duties. During the past few weeks, the council has:

“Great efforts have been made right across the council and beyond,” said Chris. “For example, our business rates team has been working flat out to channel millions of pounds in government grants to hundreds of our local businesses.

“They’ve given up the past two weekends to deal with this huge administrative challenge knowing that our businesses desperately need the money quickly to survive. On top of that, the team has also been dealing with a surge of enquiries about council tax support and other benefits. 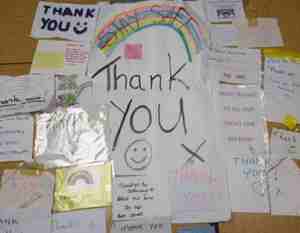 “Our leisure contractors have also stepped up to the plate, locating thousands of items of personal protection equipment from its stores, including overshoes and medical grade gloves.

“This much-needed and valuable resource was then delivered to Watford General Hospital, which has been in the eye of the storm and badly needed supplies.

“I’ve also been impressed with the support the public has shown. Our bin crews, for instance, have been overwhelmed by the many thank-you messages they’ve received from people isolated at home.

“They’ve come across countless notes left on bins, while other residents have even put up homemade posters of support in their windows.

“It’s that sort of community spirit, combined with the heroic efforts of those on the frontline, that will eventually get the district through this crisis.”

Photo: A selection of the support messages from the public to waste contractor Veolia’s bin crews.