Time to paint the town red? 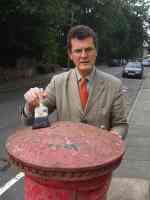 "Pillar Box Red" used to be something everyone understood.  The pillar boxes of my youth gleamed in their scarlet livery, just like the telephone boxes and the buses. This year's CPRE Christmas Book "Icons of England" with special foreword by Bill Bryson even has a pillar box as its front cover illustration.

But in St Albans it seems utterly random whether they are properly painted or just left to rust in a streaked and faded puce. With our cracked and broken streets and pavements courtesy of Herts County Council, it just adds to the sense of neglect of the official realm. I was talking about this with the Review newspaper, they wanted to follow up and I gave them a quote and this picture of the box in Hillside Road which they published on their website.

Holding a brush seemed more interesting than the standard candidate pointing position! I could equally have given them a picture of the boxes in High Oaks, Vesta Avenue, or Hill End Lane near the Spar shop - and there are many more. I pointed out this was not just part of the Post Office brand but part of Brand UK. Surely, I asked, it cannot be that difficult to send someone round with a pot of red paint and a brush? But the fact that there was no paint on my brush seems to have really excited people. Tory blogger Iain Dale was the first to try to make this a story - he must have been struggling for things to write.

Various other bloggers have joined in and produced ever more curious streams of fiction - that I was Ming Campbell's press officer, that I attended Labour Conference fringe meetings with him and Lady Elspeth, etc. I guess I am grateful for the free publicity - but it is rather amusing and bemusing that one photo can excite so much comment. Do these people have ordinary lives? Mind you I've also been told on a St Albans doorstep that I live in Bedford - a town I've been to about twice in my life - and it had to be true because the person who told him goes to church. What was that about a lie getting halfway round the world before truth has got its boots on?