The Alan Partridge star, who describes himself as “a traditional Labour voter”, took to the streets and knocked on doors with Daisy Cooper on a windswept and rainy night in the run-up to polling day. 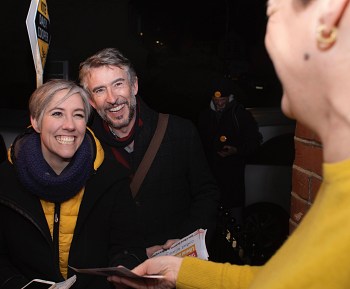 He believes tactical voting is likely to be a significant factor in deciding the outcome of the general election up and down the country.

And here in St Albans, the vast majority of tactical voting websites – just like Steve Coogan – are advising people to give their vote to Liberal Democrat Daisy Cooper to defeat the sitting Hard Brexit Conservative MP.

Steve Coogan, speaking after canvassing with Daisy to a large audience at Marlborough Road Methodist Church in St Albans, said:

“There are also many traditional one-nation Conservatives who’ve been marginalised in their own party.

“I’m very much a pragmatist right now,” he added.

“I’m hoping that people around the country will take a pragmatic view because it’s very frustrating if you feel you are principled, but all you do is have your principals in isolation and you’re never are able to see them implemented. So, we need pragmatic thinking – that’s why I’m here today to support Daisy.”