Sandy will walk it?

"Sandy Will Walk It" was the crassly hubristic slogan of my first parliamentary election campaign in St Albans in 1983 - complete with a little walking stick man figure as the logo. I didn't then but I did today - the St Albans Half Marathon at least. I did the Walking Race which has the great advantage of starting in the relative cool of 8 am - see atmospheric early morning picture (below). 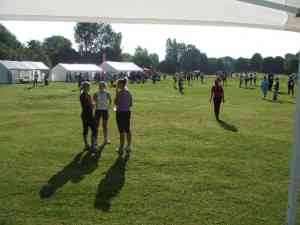 The strangest moment was walking up Bedmond Lane and hearing a shrieking whistle ahead as a steam roller clanked, rattled and hissed past on its way to Redbourn. It seemed a metaphor for my own ancient machinery huffing and puffing round the 13.5 km course, which beats the bounds of the west of the constituency. Going back down Bedmond Lane, we met a different kind of steamroller in the shape of the awesome phalanx of runners bearing down on us between the high verges like some wild infantry charge. All they lacked were the assegais. I finished my stroll in just under three hours which meant I was there to see Dominic Easter triumph in the proper race in just over an hour. I first met Dominic when I spoke at St Albans School a year ago. He is on course to be a great running star, he made the race look so easy, and I will be able to tell people that I finished the Half Marathon ten minutes in front of him - shame I had to have a two-hour start... It was a particular pleasure to be greeted at the finish line by Iqbal Zia, the new Deputy Mayor. 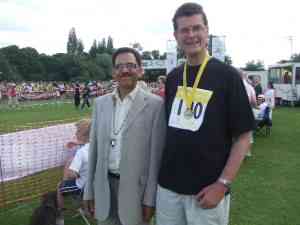 In the picture I have my race finisher's medal. Iqbal has the much more significant badge of Deputy Mayor of the City and District of St Albans. He is the first representative of St Albans's non-White communities to hold this office and he is proving to be a star. Today he took off his badge and jacket and joined the children and their parents in the 1.5 km fun run round Verulamium Park. Great stuff. One of the many best things about the St Albans Half Marathon is the way that so many different types of people are encouraged to participate - runners, joggers, walkers, veterans and children. Schools compete against each other, and my oldest son's first school St Alban & St Stephen retained the school trophy. Good to see their enthusiasm given all the snickiness about school sports. I finish this post with pictures of the two kinds of steamroller on Bedmond Lane. 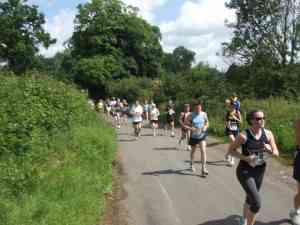 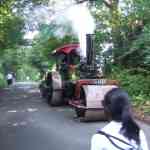