Yesterday's demonstration by Equitable Life pensioners outside Parliament represented another stage in the long march to justice for all the pensioners let down by the Government's failure to regulate and even worse its failure to come clean when it became all too clear to those in the know that Equitable Life had a problem. 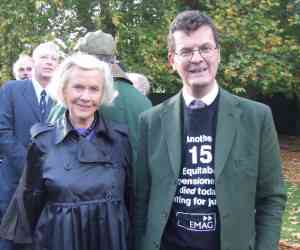 There are times when I am so relieved not to be a daily commuter any more.  I have just heard of the other side of the coin from this morning's optimistic announcement about the Abbey Flyer service, which is of course part of the London Midland franchise. Back in the topsy turvy world of the First Capital Connect franchise serving St Albans City and the route from Bedford, drivers at the Bedford depot are refusing to work on their rest days.  This is causing real problems and it's just been announced that today's northbound trains out of  St Pancras are likely to be replaced by buses after 11 pm – on what is a major night out for many London commuters. It’s not just a much longer and less pleasant journey, there must be real questions as to whether they can physically move all the passengers likely to affected.

And from reading the stream of comments from drivers on the RailUK Thameslink web forum, it seems as though drivers from the Brighton and Blackfriars FCC depots will be refusing to work on their rest days next week, so that it looks like more days of misery for St Albans commuters. Clearly there is a dispute over pay, and the drivers are leveraging the fact that FCC don’t employ enough of them and so depend on their working on their rest days – which of course is voluntary. But it’s the poor bloody infantry of the St Albans rail commuter who is left picking up the pieces.  It’s just not good enough. Both sides must settle their differences as soon as possible.

Abbey Flyer to take off as a tram

I was delighted to attend today's announcement by my old friend Andrew Adonis at St Albans Abbey Station of plans to convert the existing Abbey Flyer rail service into a tram service instead. I know from my time working for Transport for London what the likely benefits will be. The long-awaited passing loops will be less expensive to instal because trams are lighter than trains.  If we can get two passing loops rather than one, a twenty minute frequency could be on offer.  Level crossings can be replaced quite safely with traffic lights, since trams are designed to share road space with cars.  A ‘clock-face’ service where people know that a tram will arrive at their stop at set times after the hour will encourage passengers to turn up and go, thus increasing ridership.

In the longer term it is possible to imagine the lines being extended along existing streets into the centre of Watford and more challengingly up Holywell Hill into the centre of St Albans.  In the short term, we must make sure that connecting bus services dovetail with the trams arriving at Abbey Station.  Ensuring this development becomes part of an integrated public transport offer could have  a dramatic payback in terms of reduced traffic congestion. PS I remember the squalor of St Albans Abbey Station back in the 1980s when there was a squalid graffiti-covered concrete shed for shelter.  The new Abbey Station is a great improvement.

Nothing to fear in Brown's brave new Britain

One of the phrases I truly loathe is "You have nothing to fear if you have nothing to hide."  It is too often used as a catch-all excuse for completely unwarranted invasions of personal privacy.  So it is truly shocking to learn that more than 90,000 innocent people have been added to the National DNA Database since the European Court of Human Rights (ECHR) ruled that the practice was illegal last year. The facts are that 433,752 DNA profiles have been added to the database since the ECHR ruling on 5 December last year – 1,480 per day.   5.5m profiles on the database relate to 4.8m people because 13.3% are "replicates" - already sounds like something out of Blade Runner... By applying the Government’s 2008 estimate that 20.8% of people on the database are innocent to the current total, it is a reasonable presumption that there are now more than one million innocent people whose DNA is currently held, including 90,220 since the ruling.

Only 611 profiles have been removed from the database over that period So despite the European ruling that the adding data of innocent people is a breach of human rights, for every innocent DNA profile removed from the database, around 150 new ones are added. Having just written of the sinister world evoked by Harold Pinter in the current Ovo production (see yesterday's blog entry), it seems that life really does follow art.

Knives on the tables

Drama in St Albans seems to be on something of a roll.  Last night I attended the locally based Ovo theatre group's first performance in their new home in the former Patons bookshop on Holywell Hill.  It was a great loss to the city when this stopped being a bookshop - I remember it from the days of the quirky and determinedly independent Catherine Paton. But if a shop premises has to be empty, letting it to Ovo is a clever solution - it is a superb location for a cultural venue, situated as it is on the axis of the Abbey at the entrance to Sumpter Yard.  The shop interior has been stripped down and painted white - the bones of the medieval building are suddenly very apparent.

The performance was in the shed in the courtyard at the back - very intimate inside, draped in black, like an Edinburgh fringe venue. I had not previously seen the two short Pinter plays presented last night - "Party Time" and "Celebration".  Both had palpable menace.  The Abbey bell ringing practice added to the atmosphere. In an un-named city  there is a party.  Guests talk  disjointedly of exclusive clubs, island retreats and past and wished-for liaisons.  But something is happening on the streets outside beyond the curtains.  The creepy host apologises for traffic jams.  Is it a coup or just some brutal repression?  Finally the bloodied and injured brother of the only guest who behaves like a human being bursts into the party and smashes the veneer of civilisation. Cut to an expensive restaurant after the interval.  As the Ovo blurb says,   "The only visible knives here may be the ones on the elegantly laid tables, but people are also getting laid and knifed, only this time with a smile." Savage and mordant stuff - and horribly funny at times.  There is no point my saying go and see it, since all the performances are sold out.  But it is clear there is a really interesting new addition to the St Albans arts scene.  Even if the shop gets a commercial tenant, lets hope that Ovo can negotiate with the Abbey authorities to stay in the rear courtyard space and shed.

Stabbed in the front by Herts County Council

Posted by Digital Directorate | Updated 2009-10-28
I am frankly dismayed by Hertfordshire County Council’s decision not to make any highways-related objection to the Helioslough freight terminal application.  It looks like they have just caved in to Helioslough’s legal threats.  It is totally abject for them to cite concern about costs being awarded against them – of course there is always a risk but it is a classic developer bully boy tactic to make councils crumple.  Herts County Council has well and truly crumpled. It is not even a case of being stabbed in the back - it's a knife in the stomach. There were perfectly sound reasons for the highways issues to be revisited at this Inquiry.  Patterns of road usage are always changing, for example there is the potentially significant impact of Butterfly World. The fight against the terminal will continue of course.  The rail capacity arguments remain powerful reasons for the application to fail yet again.  But it is quite shocking that the Conservative ruling group on Herts County Council have decided to put narrow financial interests above those of the residents of St Albans.

I am pleased to have received confirmation from Jim Morgan, Managing Director of First Capital Connect, that any passenger who can show they purchased a weekend day return from a self-service ticket machine over the summer and failed to benefit from the Super Saver discount of up to 25 percent will now be compensated with the difference in fare. Mr Morgan wrote to me to confirm that “the original Press Release issued in June did indeed say that the tickets would be available from self service ticket machines as both suppliers had advised us that they could achieve that.

I have just been listening to the BBC You and Yours item on CRB checking of host families for school exchanges and concerns this would make schools and families even less likely to participate in such activities. We are welcoming a German girl into our home next month, and the school was advised we would have to fill in CRB forms.  On the one hand I recognise that there are few more sensitive things than taking a young person into a home.

Many years ago my sister was on a French exchange and had a distinctly unsettling experience with her exchange partner's father. But the You and Yours broadcast confirmed that these CRB checks are not reciprocal - so my daughter will go to Germany without her host family parents being similarly checked. And the intrusiveness of the form is startling - bank account details, national insurance number, mother's maiden name.  If it got into the wrong hands the information would be a gift for someone planning identity theft. And why do you need a new CRB form for every activity?  We were CRB-cleared some years ago for scout matters.  A teacher at my daughter's school told me today that he has three current CRB clearances - for church, for scouts, and for school. It feels like a sledgehammer to crack a nut and leaves me feeling very uncomfortable.

MPs should hang their heads in shame over Equitable Life Earlier this week I joined a lobby of Equitable Life policyholders from Hertfordshire and Middlesex to see local MPs including Anne Main.   The lobby was organised by the Equitable Members Action Group (EMAG) and the picture shows some of us standing in the shadow of Big Ben before going inside. Yesterday saw the first full debate on the floor of the House of Commons  on the issue of compensation to Equitable Life pension and policy holders for the many failures of the regulatory authorities in policing the company. 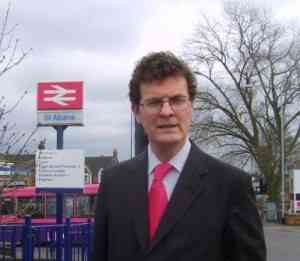 I have just been interviewed by BBC Three Counties Radio about the astonishing blunder by First Capital Connect in failing to ensure their summer promotion super saver weekend day returns could be purchased from station ticket machines. The super saver tickets were launched in June.  They offer up to 25 percent discounts on weekend train travel to London.  The press release announcing the promotion clearly stated "Tickets can be purchased at ticket offices, from Self Service Ticket Machines or online at the First Capital Connect website." Er, not true actually.  The self-service ticket machines were not recoded so throughout the summer weekend tickets purchased by this mechanism were charged at the normal, undiscounted day return rate.