St Albans has one of the largest conservation areas in the country.  It is full of listed buildings.  They also dot the surrounding villages and countryside.  Few are great monuments, most are modest domestic buildings.  The owners incur considerable expense in maintaining and improving these properties in ways that conserve our historic environment.

This makes the government's proposals to end VAT relief on extensions and alterations to listed buildings very worrying. Overnight listed building owners face a 20 percent increase in costs. The Treasury's own documents admit this will have a negative impact on construction in this area - at a time when a downturn in construction overall is seen as having been the main cause of the UK going back into recession. Alongside the rightly vocal campaign being mounted by the churches against these proposals, here are some arguments against this proposal on behalf of the more workaday buildings which make our city and district so special.

Labservatives combine to stop parliamentary reform - so no change there then

Parliament is currently going through what is called the "wash-up" - agreeing on a truncated programme of legislation to be rushed through before the House rises and the General Election.  It looks like the Labour and Conservative front benches have combined to stop the so-called Wright Committee standing order changes to give parliament control over its own business. This is very important because it is impossible to find time to debate every line of legislation, yet now the frontbench business managers decide which parts of a Bill should get debated and this is often a convenient way of dodging Commons scrutiny on big items.

I joined CAMRA when I was at university in the 1970s and I remember campaigning for real beer in college bars.  I even printed the first real beer guide for Cambridgeshire.  Little did I know then that CAMRA had been founded in St Albans and that St Albans was to be so popular with beer drinkers. 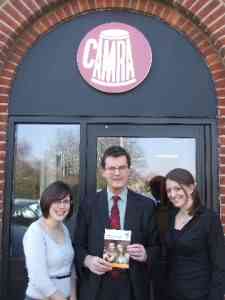 So today I was pleased to make a special visit to St Albans-based CAMRA (The Campaign for Real Ale) in Hatfield Road to sign the  Beer Drinkers’ and Pub Goers’ Charter.  The picture shows me with Emily Ryans and Jenni Hollis of CAMRA. The CAMRA Charter champions well-run community pubs, the rebalancing of alcohol taxation to support beer and pubs, the reform of the beer tie to deliver a fair deal for consumers, and the role of well-run pubs as part of the solution to alcohol misuse. Well-run pubs can be a bedrock of community life – they are part of the solution to the problem of alcohol misuse and not part of the problem.  They deserve our support.

What's the difference between the Conservative party and a banana republic?

The Michael Ashcroft story is truly extraordinary and there must be more to come. We all know that whoever wins the election will have to put up taxes and cut expenditure in order to bring the UK economy back into balance.  The only questions are timing; how much comes from cuts and where they fall; and then how and on whom tax rises are levied.

Michael Foot and the role of oratory in modern politics

Michael Foot was Labour leader when I first stood in St Albans.  In electoral terms he was a disaster, one opinion poll just before polling day even put the Liberal-SDP Alliance ahead of Labour, and in the event they limped in only a couple of points ahead.

His great parliamentary speeches preceded televising of Commons proceedings and although I worked in the House in the late 1970s, I never heard him speak in the Chamber. But many years later I was a guest at the Fabian Society 100th Anniversary Dinner where then opposition leader Tony Blair and Peter Hain were supporting acts to Foot and Barbara Castle.

I have just attended a most interesting afternoon discussing climate change at the invitation of the Green Alliance think tank.  They have invited small groups of candidates (about 25 in all) from the three main parties, whom they have identified as having a real chance of winning and who have shown a consistent interest in green issues.  We have been guinea pigs in a programme to ensure that new MPs are up to speed with all the current issues and best placed to exert an influence if elected. 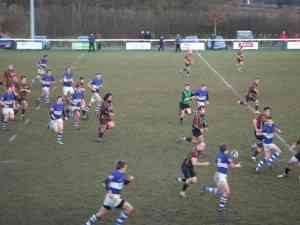 I always enjoy visiting the magnificent new pavilion at Woollams for lunches or dinners.  Recently I was a guest of Geraint John at the annual lunch to celebrate the Mini and Junior rugby programme of the club, held before the OA's dished out a 34-15 thumping of great Hertfordshire rivals Bishops Stortford. The St Albans forwards are pretty fearsome - you only need to see the team photo to realise that!

God and the Liberal Democrats

It must be true - it's in the bible.  Isaiah chapter 32, verse 8 to be exact. The New English Bible has a different translation from the original Hebrew  - "The man of noble mind forms noble designs and stands firm in his nobility." I am of course very happy to have theological affirmation that it is indeed a noble undertaking to be a Liberal. I have scoured the bible from end to end and find no reference to Conservatives.  As for Labour, we know that the lilies of the field were praised for not going there, "neither should they spin." It certainly makes you think.

Why am I writing this?  Because yesterday I went to St Albans Abbey to speak at the men's breakfast organised by Dean Jeffrey John.  The verse from Isaiah seemed a suitable introductory text! I have heard a sermon preached on this verse.  It was given by former Archbishop Michael Ramsey at the great Westminster Abbey service to celebrate the centenary of the Liberal Party in 1977.

It's a two pancake race here 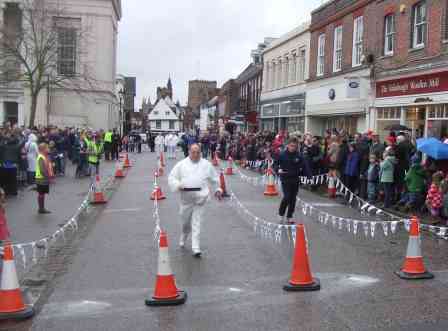 Trying to explain to Julie from France and Markus from Germany the ancient tradition of pancake racing was quite amusing. Given the soggy and bleak weather conditions, I could only admire the participants as they ran up and down in front of the Old Town Hall. As well as a "Roman Catholic priest" in full soutane, there were some brightly clad Grove House pancake flippers with the colour pink much in evidence.  Also good to see former mayor Alison Steer. Perhaps Gordon Brown should have proposed a new voting system based on pancake racing? - crepe flip-flops rather than the policy kind?

How green are my Tories - not

Posted by Digital Directorate | Updated 2010-02-16
Why am I not surprised that the list published by the Tories today of ‘Ten reasons to vote Conservative’ did not include any reference to the environment or climate change? So much for David Cameron’s claim that he has ‘sought to push the environment up to the top of the political agenda.' It follows the recent revelation that reducing Britain’s carbon footprint was at the bottom of Tory parliamentary candidates’ priorities. Mr Cameron has done his photoshoot with huskies, now it seems to be back to politics as usual.