Time for Boris to take London's tanks off Hertfordshire's lawn 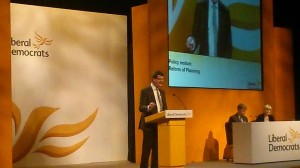 Did you know we live in the London-Luton-Bedford (LLB) planning corridor?  Well nor did I and nor did Hertfordshire - at least the county wasn't consulted when London mayor Boris Johnson came up with the idea. The previous Labour government unilaterally described St Albans and Watford as London Arc West (‘LAW’) and I didn't like that either.

Does First Capital Connect ever go the extra mile?

Today’s Which? Survey of rail passenger satisfaction yet again shows that First Capital Connect is the bottom rail company in terms of customer satisfaction, and on cue we have another day of massive rail disruption. Of course we understand that flooding has affected the southernmost part of the Thameslink route. But the question all weary St Albans commuters will ask when they went to a station which had to be shut because of the congestion and no emergency buses till 9.15 is whether this could have been anticipated and whether Brighton-based rolling stock should have been moved north by First Capital Connect to maintain the bulk of the service, with Brighton-based drivers if necessary being taxied or bussed to their trains. Why does there always seem a lack of initiative and anticipation from First Capital Connect?  It looks like going the extra mile over the weekend could have paid huge dividends and not let down so many Herts and Beds commuters.

We must plan for resilience in the face of future flooding

There is a clear need for the the county council and other authorities to ‘up their game’ as further heavy rain threatens continuing misery and disruption to St Albans residents. Yes, the amount of rainfall is virtually unprecedented.  But we all know that gullies have not been maintained and road-side ditches in countryside stretches have not been dredged, forcing the closure of crucial local links like Sandpit Lane and Colney Heath Lane and quite unnecessary flooding of neighbouring properties. In London Colney there are always likely to be problems at the riverside.  But there is no excuse for the misery inflicted on the residents of Five Acres. 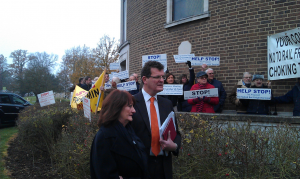 I went to County Hall yesterday for the special meeting of the Policy and Resources Panel preparing to go down with guns firing as they passed the officers' recommendation to sell the crucial county-owned Green Belt land to Helioslough and sign up to the 'section 106 agreement' for remedial works imposed by Eric Pickles.

The picture shows me with fellow Lib Dem county councillor Aislinn Lee, whose Park Street and St Stephen county division contains the proposed lorry terminal site.  I applaud her fight against the terrible proposal as I also applaud STRiFE and all the local residents who have given so much time to the campaign. The officers' report said the county now had no choice except to sell the land following Mr Pickles's decision.  I thought this was bunk and Paul Stinchcombe QC, the counsel for STRiFE agreed with me.

Public Health is back as one of the responsibilities of Herts County Council, a return of this function to local government after a gap of 40 years and frankly not before time. Selbie is a London-based Scot with one of those reassuringly pawky Scots medical accents (and he claims 'a good face for radio').  His message is that we have come a long way on improving life expectancy although we had a lot of catching up to do, but far too many people are living 'with misery'. So many of our health outcomes depend on our own choices - tobacco (170,000 people still smoke in Hertfordshire), hypertension (most US men know their blood pressure, most UK men don't, yet how can we manage what we haven't measured?), over-eating, over-drinking.

St Albans stabbed in the back for thirty pieces of silver

We had mostly left County Hall on Wednesday when they slipped the papers into our pigeon-holes for the upcoming special meeting on the Park Street Freight Terminal.  The Conservative ruling group is recommending that the county council enter into a Section 106 agreement with Helioslough for the Park Street freight terminal and sell its land to allow the development to go ahead. In effect, it's throwing in the towel.

What were you doing fifty years ago today?

I was lying on my stomach on the hearth rug in front of the fire - no central heating in those days and we didn't have a television - finishing an pencil drawing of a steamship going up the Amazon through the jungle.  We had been learning about Manaus, its opera house and rubber production in geography at school. It was after supper, the curtains were drawn against the darkness.  The phone rang – which was unusual.  My father was away from home, allegedly in Kenya.  At least that was where the weekly black and white postcards came from.  So my mother got out of her chair to go into the cold of the front hall to answer the call.  She came back quite pale, “It was Mrs Lachlan.  President Kennedy has been shot.”

It is worrying to read in this week’s Review that West Herts Hospital Trust is yet again reviewing the future of St Albans City Hospital as part of the Watford Health Campus Scheme.  I have just been interviewed by BBC 3CR on my thoughts. We don’t have any detail, moving bureaucrats and offices would be very different from moving clinical services.  St Albans has a long history of being stabbed in the back over its hospital – promises that A&E would stay by an MP who then scarpered off to Harpenden, subsequent promises of an accessible super hospital at Hatfield which idea shipwrecked on Gordon Brown’s obsessions about using private finance.

I was somewhat startled to read a claim this week that the previous Labour government had the lowest overall tax burden on high incomes of any government since Victorian times.

Although they make a big thing of George Osborne setting the top tax rate 45 pence in the pound, they kept it at 50 pence in the pound for all but a few weeks of their period in office.  If you follow the logic of their claim that the current government has given top earners a cheque for £45,000, then by the same token they gave Richard Branson and his ilk over £1 million. But then this was the same Labour government where one of its cabinet ministers said in public that he had no problem with people being "filthy rich" - presumably to ensure invitations to congenial parties on yachts. 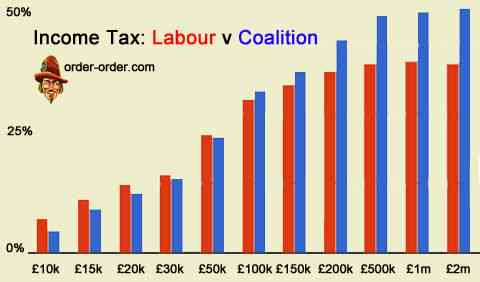 Posted by Digital Directorate | Updated 2012-07-06
Nice to see Liberal Democrat MP Julian Huppert described as the "cleverest man in the House of Commons" as he is interviewed by Andrew Neil on the announcement of the discovery of the Higgs-Boson particle by CERN.