Recovering from a birthday night on the tiles 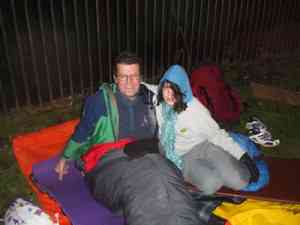 It was on the (very wet) grass actually - outside St Albans Abbey. It was my 12 year old daughter Dora who persuaded me that my birthday was no excuse for not joining her at the annual Sleep-Out in aid of local homeless charities. It is the third year I have done this and it was not an obvious choice for a birthday celebration

Indeed my son Tom asked before we set off if when I was 5 years old I had ever imagined I would grow up to sleeping in the open without a roof 50 years later... The cause - Open Door St Albans - is an excellent one. I just wish it hadn't started to rain at about 10 pm - in spite of best efforts, the sleeping bags got a bit wet and then the later dry but cold wind made it fairly bracing. My smile at the end of the night was slightly forced!

I picked our spot with our back to the railings and facing the magnificent floodlit cliff of the nave facade. My neighbour on the grass turned out to be Charles Burch, new curate at St John's Southdown. We had last met in 1980 in the gloomy corridors of Madison Square Gardens in New York where we were both part of the UK observer delegation at that year's Democratic National Convention. We both heard Edward Kennedy's epic platform speech conceding victory to Jimmy Carter - and also Jimmy Carter's own acceptance speech where in talking of that year's death of Hubert Humphrey he referred to "Hubert Horatio Hornblower".

I thought I was drunk when I heard him say that since the convention parties for foreign "VIPs" were truly legendary affairs - but Carter really say it, all part of his halo of accidents which helped elect sunny Ronald Reagan in his stead. A bit of a weird coincidence to have the two of us join the many young people at the Sleep Out. The Sleep-Out is held every year with a host of willing helpers to patrol the precincts, supply all-night soup and biscuits etc etc. When there is so much criticism of young people, it is a great advertisement for so much that is good in our society.

The Open Door hostel in St Albans is a really good cause. It is the only "open access" hostel for homeless people in Hertfordshire - ie people can just turn up for a bed, bath, food and a chance to wash their clothes without being referred by an official agency. It fills a great need - just one night of being cold and wet tells me that. But I suspect I will spend next year's birthday celebrations in snugger surroundings!