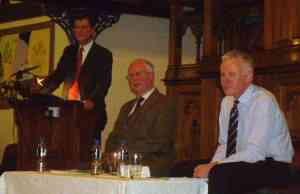 It was a reflective and thought-provoking public meeting on Thursday night with Norman Lamb MP and Cllr Nick Hollinghurst talking about the current state of and future prognosis for our health services both locally and nationally.

Marlborough Road Methodist Church was nicely full and the audience was treated to a grown-up discussion of the opportunities and threats that the NHS faces. Hick Hollinghurst spoke first on the local picture, positive and negative. Then Norman spoke passionately about the need to improve particularly in mental health provision, about reducing some of the more rigid NHS targets (negative) and replacing them with guarantees of standards (positive), about the need to streamline the multitude of supervisory bodies all doing similar jobs and to bring greater efficiency into the NHS by re-designing processes and service delivery.

As chairman for the night, I found the Q&A session particularly interesting from an audience which was a mixture of general public and healthcare professionals.

•    The first question picked up on the appalling case where a German doctor with no GP experience came over to work in an out of hours on-call service and killed a patient through a massive overdose of the wrong drug.  Current freedom of movement rules in the EU meant he faced no requirement to pass language and competency tests.  As it happened Norman Lamb has been working closely with the family of the deceased man and he was robust in his approach to this issue - the prime responsibility is to ensure patient safety and that means there must be confidence in the language and medical skills of people coming over to work as doctors, period.  Not all EU member states' medical regulatory bodies are of the same standard.  It's not like someone coming to drive a crane.  Patient safety must be paramount.

•    A member of the audience spoke movingly of her mentally handicapped son - now grown-up - and how he is given little or no dignity or respect when it comes to NHS treatment.  There is clearly a particular issue which I will be following up with her but Norman spoke with feeling of how mental health is generally the poor relation in the NHS.

•    A local pharmacist asked about competition versus collaboration in the NHS.  At the moment NHS workers are often forced to compete against other branches for finance/equipment etc.  Would it not be better to focus on collaboration between the different branches instead.  Norman Lamb said that competition had introduced fresh thinking and improved NHS services in certain areas but it could not be the be-all-and-end-all.  It was important to ensure that there is integrated care - he instanced a very interesting healthcare provider on the west coast of the USA - so there is a need for both competition and collaboration.

•    Another question was about the effect of the European Working Time Directive on doctors’ training.  Norman Lamb said that currently only 9-18% of specialists are complying with the 48 hours rule, all the others were working beyond these hours (mainly without reporting it).  The new rules also mean that there need to be more handovers between doctors which could compromise patient care.  There should be greater flexibility to these rules, and the ability to work up to 56 hours a week.

•    NICE was raised – whether it is effective, whether it makes good judgements, whether it is fair.  Norman Lamb said that the principle of NICE was good, however the criteria with which it judges value for money should be known in the public domain – currently they aren’t.  Also there is the problem that NICE doesn’t take into account the impact of particular drugs on the lives of carers, or the economic impact if a particular drug would enable someone to continue to work and pay taxes.  It also doesn’t measure what is lost by paying for new drugs – what services have to be cut to enable the funds for the new drug to be available.

•    There was a very interesting question about whether the National Dementia Strategy is viable in the current economic climate.  Norman Lamb said that the strategy was welcomed as an aspiration but there wasn’t enough money at the moment to make it work.  However the issue of the funding of social care is of vital importance.  Many people fail to qualify for means tested free care, but do not have much money and so are spending everything they have on care.  There is a need to get all 3 parties to work together to find a solution to this.  We need to accept that more money is urgently required in social care, the parties should commit, before the general election, to work together to find a solution to this, since it will have to be paid for.

•   Finally there was a question about Link and how well current systems of public involvement in the health service are working.  Norman was very critical of the chopping and changing since the abolition of community health councils, and also of the way that over-bureaucratic demands for CRB checks and similar work to put people off getting involved. I wish there had been time for more questions but Norman had to get away for a train to get him home to Norfolk at a reasonable hour travelling from Chelmsford so not risking FCC!).  From the e-mails I have received following the meeting, it is clear that people find events like these really informative.  When I was a young candidate, public meetings were much more common.  I have a hunch they may make a comeback  as people look for more than soundbite politics.

And giving his reaction to the meeting, Nick Hollinghurst sent me a most insightful note yesterday: The big prob with all this stuff is to balance out the (a) anecdotes (nearly always negative), (b) NHS improvement plans (nearly always over-optimistic), (c) excuses (always self-serving), (d) BMA propaganda, (e) local politics (often simplistic, populist and willfully ill-informed), (f)  national politics (often simplistic and populist), (g) drug company promotion (often venal and self-serving), (h) pressure group campaigns (sometimes populist, often ill-informed, occasionally obsessive, but also sometimes quite excellent) And to do so while finding one's way around the NHS structures (getting simpler, but still somewhat Byzantine) and understanding the science (often challenging and often, especially the statistics, downright challenging). Apart from that, it's easy!