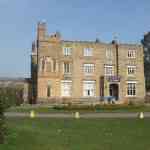 I could not have chosen a better day to make a return visit to Oaklands College's beautiful Smallford site as my photo of the main building shows! I last came here in the 1980s, some things have changed but the attractiveness of the environment has not. I was shown round by Mark Dawe, the Principal

For those of us who went through the school sixth form and university route, further education can be something of a mystery and it was great to see trainee footballers, florists, chemists, bricklayers, joiners, electricians, plasterers, equine specialists, not to mention the sheep and the goats. (Mark was not sure whether the goats were where they should be but they left us alone and just wanted to enjoy the sunshine!) Oaklands is of course waiting for the result of the current planning inquiry into its proposed state-of-the-art new central college building on the Smallford site, which will take further education out of some of the very creaky wooden huts at the back of the site and into a 21st century plant. A huge amount of effort has been made to get the scheme to "shovel-ready" status (that wonderful Obama-ism).

But it is suddenly under threat following a budget bombshell from the Learning and Skills Council (LSC). The LSC had promised £45 million towards to overall £120 million cost of the new college. Without it there is no way that the scheme can proceed. Now there is the revelation that the LSC has vastly over-extended itself in making promises for far too many FE redevelopment projects round the country. Some FE colleges have already had their hopes dashed, even after they have committed many millions in development pre-planning. In the case of Oaklands College, the Smallford project seems to be in a black hole limbo. The Secretary of State for Communities and Local Government will make her decision on the just completed planning inquiry by July. As stated above, the £120 million Oaklands project is “shovel-ready”, and with a real emphasis on using local Hertfordshire contractors and suppliers for the construction work.

Teachers and students are really excited by the prospect of a state-of-the-art new college building on the Smallford site, which would be completed just two years after work begins. If ever there is a time to promote and encourage the FE sector with its emphasis on practical training and reskilling, it must be now. But it all becomes academic if the Learning and Skills Council reneges on its promise of £45 million towards the total capital cost. We are now told that Sir Andrew Foster has been appointed to conduct a review on the whole national funding situation. Apparently he is expected to report at the end of this month. But it is hard cash which is needed, not warm words. So much effort has been made by so many people to get to this position – it will be heart-breaking if all that effort comes to nothing because of budgeting incompetence by the Department for Innovation, Universities and Skills.